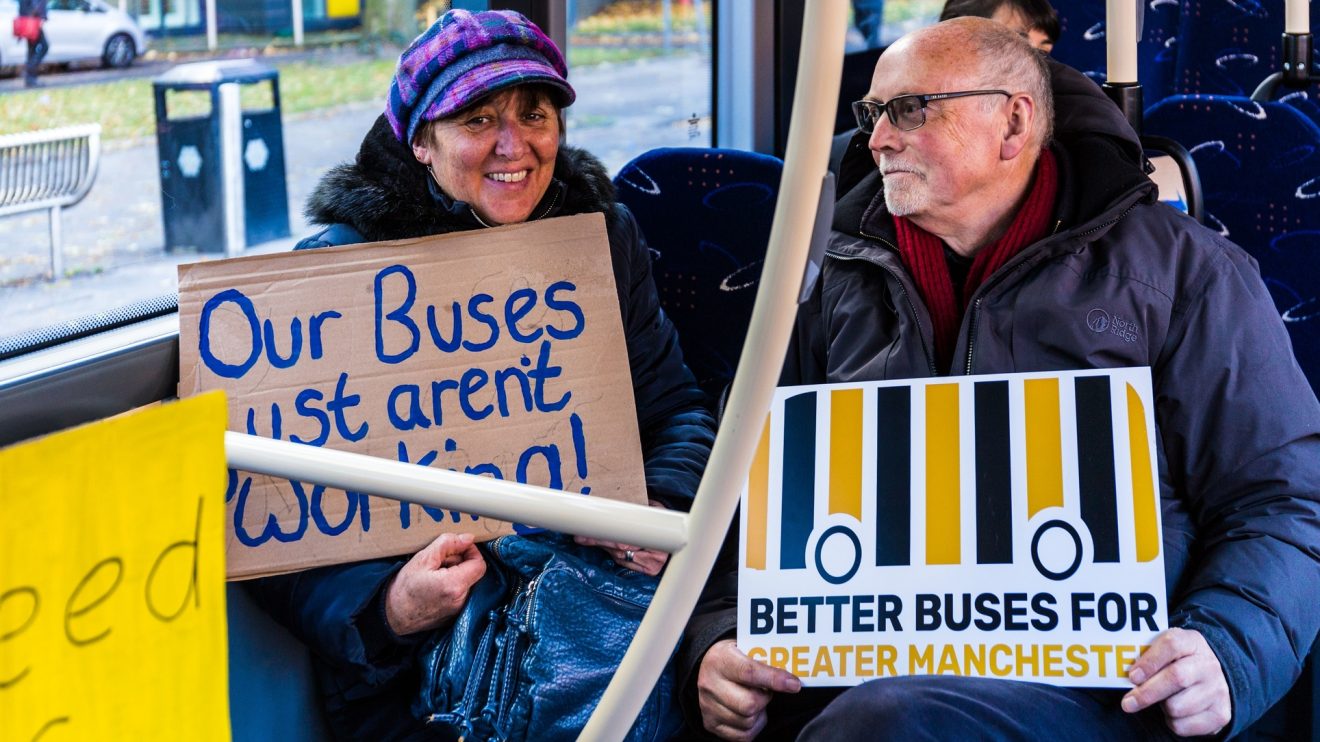 UK bus services outside London were de-regulated in 1986, long before the UK privatised it’s train network. Why then has the campaign to re-regulate the buses only recently started to gain traction?

On a wet and windy Saturday morning, a small group of twenty somethings arrive outside Manchester Central Library and set up a fold up table. They are cheerful and energetic despite the weather, friendly and engaging as they divide up the clipboards and stickers. They are Better Buses For Greater Manchester, and they are here to raise awareness of the campaign to re-regulate Greater Manchester’s ramshackle bus network.

It’s a lively campaign, made up of a coalition of bus passengers and bus staff. Their meetings are packed out with activists, bus staff and bus riders of all ages and backgrounds from the ten local authority areas that make up Greater Manchester.

The group’s social media campaign highlights the many reasons why there is so much strong feeling around buses in the region and there is clearly local support for the campaign:

Locals are fed up to the back teeth of cancelled routes, late buses, and rising fares.

The Manchester campaign isn’t the first time that a UK region has tried to bring it’s bus fleet back under local control: In 2015, a campaign to regulate the buses in Tyne and Wear was defeated, despite local authority support. Since then, new hope has been provided in the shape of the Bus Services Act 2017, which gives local authorities the option to form bus partnerships or franchises with local operators, options that were not previously on the table.

Andy Burnham, Mayor of Greater Manchester, has made a number of statements in the past year suggesting that he would support either franchising or re-regulation. He has also made it clear that he would like a simpler ticketing system, and that the region deserves a better bus network, ideally one run on London lines.

The London bus network was unique in escaping de-regulation in 1986, and it is also unique in being the one area of the country where bus travel has increased in recent years. Statistics show a series of worrying trends: Plummeting journey numbers, slashed routes and skyrocketing fares. The introduction of the Bus Services Act of 2017 acknowledges this decline.

The media talk of “postcode lotteries” when it comes to describing variations in how NHS services are provided across the UK, and there is an underlying sense of resentment within such narratives, one that suggests that certain areas of the country are missing out on services provided to others. Transport for Quality of Life, in describing the state of play with UK bus service provision in 2016, went even further: Bus users in the UK, they claimed, “inhabit different worlds, depending on where they live.” They talked of “first world” (London) bus services vs “second world” (Big cities) and “third world” (Rural areas).

“In the first world, Londoners experience frequent services on a network and timetable designed by a transport authority that has the powers and funds to make the system work as a whole. In the second world, other big cities experience some good bus services where routes are commercially viable, but serious deficiencies elsewhere. Rural bus users live in a third world with a skeletal service or, in some places, no service at all.”

Inspired by the Bus Services Act 2017, the Better Buses For Greater Manchester campaign has the potential to go national. Greater Manchester’s ten local authorities are not alone in facing extensive problems with their bus network. The problems and concerns that they are raising are not unique to Greater Manchester, they are national issues and should be discussed as such.

“I think it was really interesting last year when Jeremy Corbyn mentioned buses and he was sneered and laughed at in Parliament” says Pascale “It feels that people have downgraded buses and it feels, sometimes, that trains are a very middle class issue in the sense that it tends to be people travelling further distances, paying a little bit more for those journeys. But buses are really important locally within our communities, whilst also going all across our regions.”

Oxford academic David Banister published a book earlier this year, Inequality In Transport, which drew attention to class differences in modes of travel throughout the UK. He found that the most wealthy five percent in UK society drive more, walk less, ride fewer buses and make 50 train journeys a year compared to 14 by the poorest five per cent in society. The poorest five per cent in society walk more and make 113 bus journeys compared to just 31 for the richest five per cent of society. MP’s, tending to come from wealthier backgrounds than the general UK population, were acknowledging these differences in travel preference when they sneered and laughed at Corbyn’s interest in bus travel.

London bus travel, as part of an integrated transport network, works on a smartcard system, which includes a daily cap on travel spending. This means that no matter how far or frequently you travel on a single day in the capital, there is a cut off point in terms of how much you can be charged. In Greater Manchester, if you want to buy a ticket that can be used on all of the different routes provided by the 87 different bus providers across the region, you need to buy a System 1 pass. A daily System 1 pass will cost you £5.80, a weekly System 1 is £19, and a monthly System 1 is £68.00. These are the prices for bus only System 1 passes: Prices for bus, train and tram inclusive System 1 passes are a good deal higher.

As Pascale puts it “you have to have a degree in bus tickets before you leave the house.” Effective use of the ticketing system relies on bus riders “really thoroughly” planning “every minute of your week.”

She offers an example as to why the current ticketing system doesn’t work “I didn’t know what I was doing the other day, so I – in the moment – bought a single, and then realised that I was gonna have to buy two other tickets to get back home and my bus journey, my day, was going to cost me seven fifty.” Had she purchased a System 1 day ticket, it would have cost her £5.80, which “isn’t cheap anyway” but “seven fifty really isn’t cheap, it’s extortionate.”

Aside from extortionate and confusing fares, Greater Manchester’s bus information has not kept up with the demands of customers in a digital world. The closest thing Greater Manchester has to real time information is the bus app, where bus riders can text a unique bus stop code to a number maintained by TFGM (Transport for Greater Manchester). The app then tells you when the next bus is coming and how far away it is.

Pascale has used this service, but she hasn’t always found it to be reliable. “It’s happened to me, and to people I know, where it [the bus on it’s way] will quite literally just disappear from the app and not turn up” with such unreliable information, the app is just about useless.

Despite bus de-regulation, there are twelve local authorities in Britain that still have municipally owned bus operators. Reading is one of them. But, as the Transport for Quality of Life report acknowledged, they are vulnerable to outside competitors, who, under de-regulation, are able to make use of competition laws and steam into town with the intention of stealing away the most profitable routes. This phenomena is known to seasoned bus riders and bus watchers as a Bus War.

I have seen the impact of bus wars with my own eyes: My local route, the 192, which runs between Hazel Grove and Manchester Piccadilly, has been subject to three bus wars since 1986. In the most recent carnage in 2006 and 2007, other buses in Manchester city centre were re-routed away from their regular stops to make room for the huge number of buses flooding the 192 route. Congestion and air pollution increased as a direct result of the increased numbers of buses on the route, and dirty tricks prevailed alongside dirty air.

As bus war veterans will tell you, fares may be slashed as two companies fight for customers, but you’ll also be privy to the familiar sight of two vehicles from one company being used to pin a bus from the rival company up against a bus stop while a third bus from the original company zips ahead to the next stop on the route to collect the passengers, stealing them away from their rival.

This race to the bottom has other consequences: Low overheads for companies who want to win routes, low wages and dangerous working conditions for drivers, and unsafe buses. I recently witnessed a pensioner screaming and writhing in agony as the bus came to a particularly suspension bruising stop at Stockport bus station. As Better Buses for Greater Manchester have signposted in recent times, Greater Manchester’s ageing bus fleet has also been known to catch fire.

When private bus companies are fighting over the most profitable bus routes in the area, when profit is all that matters, this leads to cherry picking and to less profitable, but socially necessary routes being cut altogether or severely reduced in frequency. In these situations, a bus company can pull out altogether, leaving passengers without a service. If the route that has been cut is a socially necessary route, one or more councils may step in to fund the route and find a new provider, but in austerity, this is far less likely to happen.

When routes are scrapped bus riders are forced to make other arrangements. The Manchester Evening News recently drew attention to commuters from Salford who had seen their local services scrapped and were now struggling to get to work. Similarly, one of those mentioned in the MEN report was Maria Brabiner, a cleaner who is forced to walk from Salford to Manchester city centre every Saturday morning at 4am because there is no service that can get her to work at that time.

The growing phenomenon of commuters walking to work, often because they have no other option, raises all sorts of questions about public safety and public transport: Surely in 2019, in one of the biggest cities in the UK, we should have a transport system that works with modern working patterns and does not place commuters in vulnerable situations? Maria spoke to the MEN about a particularly harrowing incident she was party to during her walking commute, and I suspect that she is not the only one.

Anecdotally, I am aware of a number of twenty and thirty somethings in the Greater Manchester area who now cycle to work. Yes, it is a greener option, but many are choosing to cycle to save money and because they cannot afford to travel by bus anymore. As with walking to work, cycling on the heavily congested, polluted roads of Greater Manchester is not a safe option. Young people are using cars and buses less, and I would extrapolate financial reasons as being at least part of the reason why.

There is no reason why buses cannot be a lynchpin at the heart of a UK wide integrated, regulated public transport network. One that would operate for, rather than against, the public. It is a public service. As Pascale says “They’re not for, and shouldn’t be solely for, profit. They’re for people and for getting us around. Public control would allow us to have a service that really puts our communities first”

Sexism: A Pocket History
How Can We Tackle Racism In Football?
Comment