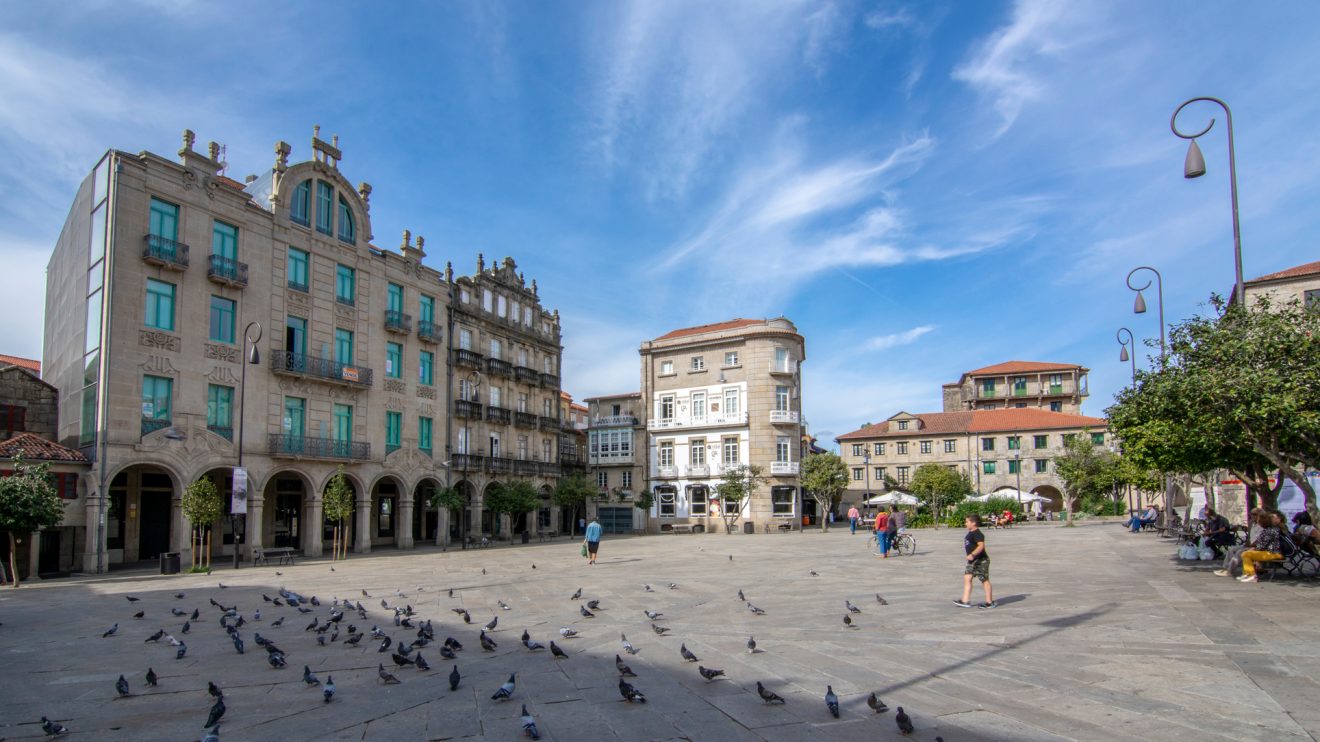 A car-free city or carfree city is a population centre that relies primarily on public transport, walking, or cycling for transport within the urban area.

It’s Saturday evening in Pontevedra and a crowd is beginning to disperse in the Praza de España. The thick layer of grey cloud that hung stubbornly over the city has burnt off, revealing a watery sunset that spreads a rosy glow over the bustling town centre. Groups of runners in neon orange t-shirts stand around drinking water and stretch aching muscles. This is the Carrera Ponle Freno, a 10-kilometre race that ends in the historical Galician city. Whilst in any other town volunteers would be clamouring to get the streets cleaned up and reopened to traffic, here they stand around congratulating participants and chatting to families. Pontevedra is not like any other town in Spain: this is a city that has banned cars.

The pedestrianisation of the city is just one of the environmental measures introduced by mayor Miguel Anxo Fernández Lores when he was elected in 1999. By prohibiting vehicles from entering the 300,000 square-metre centre, Lores succeeded in reducing the number of automobiles passing through the city on a daily basis from 80,000 to 7,000.

“The truth is that before the traffic was complete chaos,” says Camilo Garrido, lifelong Pontevedra resident and owner of the Acolá hostel in the centre of the city. “People drove around these streets in both directions and there were way too many of them for a city designed to meet the needs of the previous century.” Today, vehicles are permitted in only 25% of the city and there is a strict 30 km/hour speed limit in place. Progressive pedestrianisation has created a whopping 1.3 million square metres of car-free space with 40 kilometres of new walking and cycle paths laid to promote alternative forms of transport.

Benefits of a carless city

The benefits are clear: Pontevedra’s CO2 emissions have decreased by 67% since 1999, with pollution levels now well within the safe limits set by the WHO (for context, 80% of cities in the world currently exceed the recommended pollution levels). There have been no fatal traffic accidents in the last decade and the city has attracted 12,000 new residents.

Living in a carless city

But what do Pontevedra’s locals think about the car-free city? Vehicle restrictions are notoriously unpopular; so much so that parties chewing at the political bit are apt to list their abolition as a voting incentive on their manifestos. Just a few months ago, the new right-wing mayor of Madrid announced his intention to suspend the low-emission-zone initiative Madrid Central, despite its success in reducing levels of nitrogen oxide and CO2 in the capital. In Pontevedra, the vehicle ban may have initially attracted some criticism, but residents seem to have come around and wholeheartedly embraced the system.

“It’s very practical, there’s no pollution and it’s nice for tourists who come to visit as well,” says Stephane Renard, owner of the popular French eatery Crepeo in the city centre. “The only possible drawback is that we only have 15 minutes to unload our stock, but it’s nothing serious. From a business perspective, it’s been a positive experience for me.”

Among those tourists escaping the Spanish heatwave are Yolanda Moreno and Antonio Gallardo, visitors from the town of Alcorcón in the suburbs of Madrid. What were their first impressions of Pontevedra?

“There are no cars, no exhaust fumes, you can walk everywhere, it’s a very pleasant city, very pretty,” enthuses the latter, describing how they parked up outside the city centre and explored the town on foot. “I didn’t know that the city has actually won prizes for sustainability,” adds Yolanda, referring to the fact that Pontevedra received both the 2013 European Intermodes Award and the 2015 UN Habitat Award. “The city has a really positive vibe.”

Nina, a visitor from Berlin hiking the famous Camino de Santiago, agrees: “It’s very green, there are a lot of plants, it’s a lot calmer than other towns I’ve walked through and I’ve really enjoyed being here – I wish we had a scheme like this in Berlin!”.

Could this work in other cities?

Whether other European cities should adopt similar measures for limiting traffic is somewhat of a hot topic right now. Whilst progressive EU legislation since the 1970s has seen air quality slowly improve, pollution is still estimated to kill around 800,000 people across the continent every year. A recent ISGlobal study of PM2.5 levels in Barcelona concluded that reducing the levels in line with WHO safe limits would increase the lifespan of every resident by 47 days. Could the Pontevedra model be successfully be rolled out across larger European cities?

“I think that the system could work in a larger city, yes,” says Camilo Garrido. “But it would need to be combined with a more reliable system of public transport. You need to look at a radius of 20 or 30 kilometres around the city and make sure those areas are well connected as well.”

“There are other cities in Europe that are already starting to implement this model,” adds Stephane Renard. “We’ve had delegations from places like Paris and Grenoble come to visit Pontevedra to learn how to replicate the system we have here.”

Whilst logistics, funding, public opinion and party politics all play a part in the success of initiatives aimed at improving air quality in urban areas, Pontevedra is living proof that it is possible to have car-free cities in the 21st century. With the escalation of environmental degradation around the world, now is the time for us to consider alternative city models to tackle air pollution and promote a greener way of living.