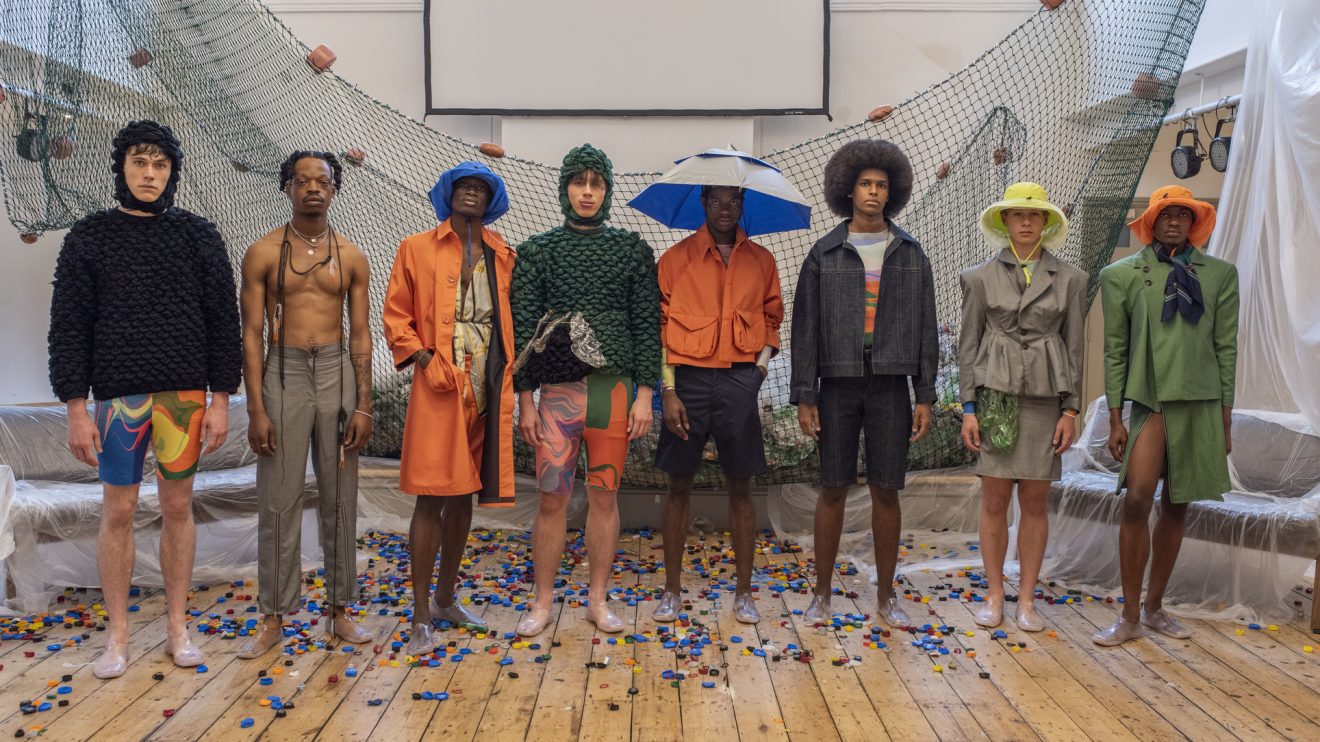 With the ‘fast fashion’ debate very much alive and kicking, reading that headline probably came as a bit of a shock. It’s true though – this year at London Fashion Week Mens, there was a focus on sustainability and environmental mindfulness, that brought attention to the issue of recyclability.

There were many great designers who came out in force to spread the message, and a few stood out enough for us to write about. Whilst bigger names like Bethany Williams and Zilver, have been getting a lot of media attention for their runway shows, we wanted to take a look at some of the more hidden talents of LFWM.

One of the stand out brands was Jubel – offering a playful collection that discusses serious topics under the umbrella of fashion. His focus this year was on plastic in the ocean and sustainability both at home and abroad. With international inspiration and a bucket load of creativity, the founder made a statement that we could get behind.

What’s Going On With Plastic In The Ocean?

We’ve all heard loads about the plastic in the ocean issue, and the way that single use plastic is building up at an uncontrollable rate – with plastic bottles and straws being some of the worst offenders.

Obviously, these materials are incredibly hard to breakdown which results in stores of it that can’t be disposed of easily – not great for the environment. In fact, it’s a little bit worse than not great – it’s actually catastrophically bad.

So bad that there are microplastics everywhere on our planet, including in Arctic Ice (we know?!). Every day 8 million pieces of plastic make it into our ocean. We manufacture over 300 million tonnes of plastic a year. Shockingly, that’s the equivalent weight of the adult population of the planet in plastic – per year. It’s putting our planet in serious danger and killing our ocean life bit by bit.

Jubel is a brand that doesn’t take itself too seriously whilst discussing serious topics like plastic pollution. The collection at Mens Fashion Week was able to inject enough fun to attract attention, but equally enough sincerity to draw focus to the issue at hand.

His collection ‘Grandma Goes Fishing’ used recycled materials to create some striking and out there pieces that caught our eye. These garments highlight the plastic pollution issue and tackle the toxification of oceans head on. With an emphasis on plastic, Jubel SS20 aims to comment on the plastic issues worldwide as well as within the fashion industry.

“I want to tackle the issue of waste across the board. I’d love to reignite the plastic pollution movement that we’ve seen creeping up in recent years in the industry”.

Jubel drew inspiration from the older women that he grew up around in London, who he remembers as super glam. The community of women in South Korea also influenced this collection, as they go diving to feed their families in an unintentionally sustainable way.

Interestingly, the two parties that influenced his work – namely the East London glam girls and the diving South Koreans- couldn’t be more different in terms of sustainability. On the one hand, there is fast fashion and cheap glamour which permeates through our culture, and on the other, there is accidental sustainability – it’s a nice juxtaposition of influences.

The pieces themselves reflect the inspiration behind the piece quite clearly –  “the silhouettes in the collection reference the work uniform of fishermen, and link to the ocean with the vibrancy of the colour palette”.

A Bit About Jubel

Jubel the brand was founded in 2017, by LCF graduate Jubel F. An East London boy, born and raised in Bow, Jubel is every inch a homegrown talent. His work takes inspiration from the places he grew up –  “I was always surrounded by these fabulously glamorous older women, who would go around on their electronic scooters dressed to the nines. They showed no signs of slowing down when it came to their style, and I love that”.

Jubel isn’t one to shy away from his roots, and his recent collection flirts with the London landscape, whilst being all about the big ideas surrounding plastic too. He told me “all of the plastic bottles that hang from the background netting were collected from Hackney over the last month”. It’s a shocking fact, but one that only prompts change when it’s placed right before our eyes, as Jubel does brilliantly well.

Will Fashion Ever Let Go Of Its Obsession With Youth?
Get Paid To Recycle Your Razors: Gillette Teams Up With TerraCycle
Comment