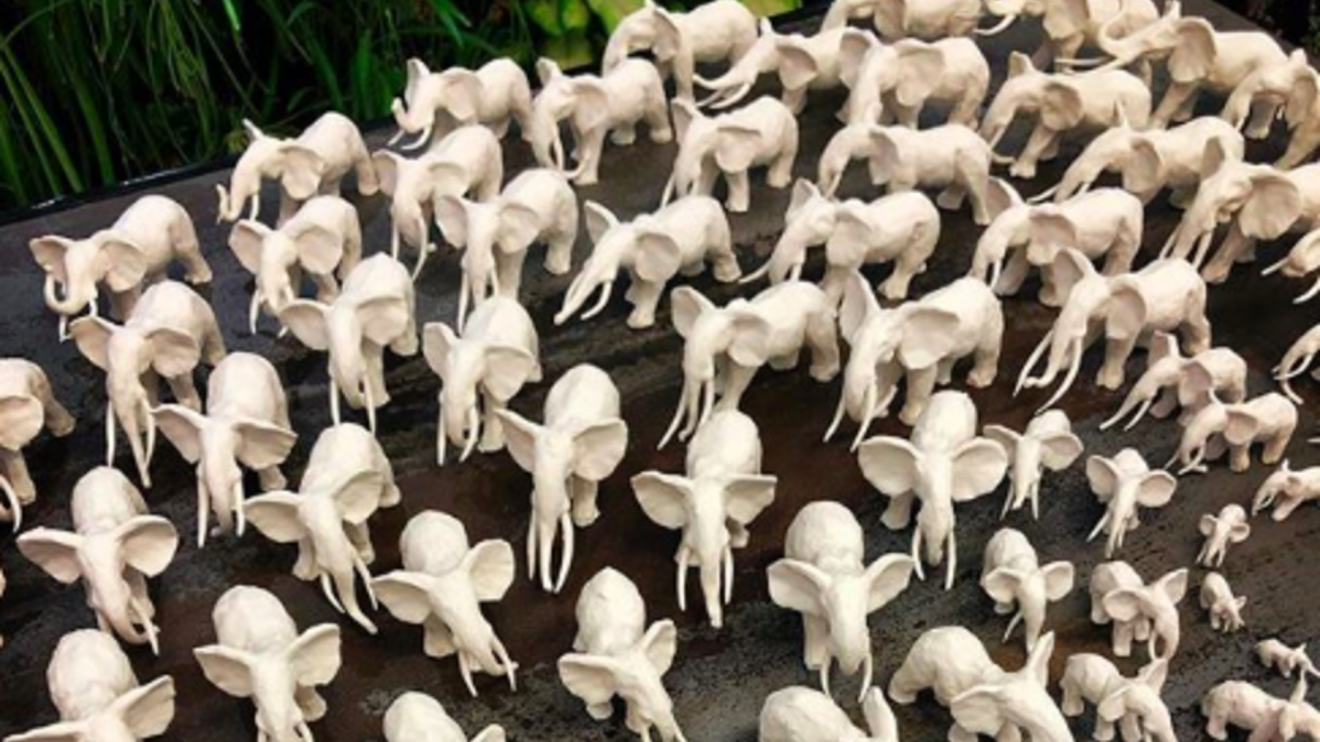 At the end of last year, ceramic artist Charlotte Mary Pack celebrated Wildlife Conservation Day by staying awake for 24 hours to handcraft 100 porcelain elephants. The purpose of this challenge was to acknowledge the 100 African elephants that are estimated to get illegally killed each day for their ivory tusks.

Ivory trade, (the selling of elephant tusks) is responsible for a vast number of elephants killed every year. These are often crafted into consumer products to sell all across the world, such as jewellery and ornaments. Despite CITES (Convention on International Trade in Endangered Species of Wild Fauna and Flora) announcing an international ban on trading ivory in 1989, the demand for this material still remains high, particularly across Asia. The Born Free Foundation highlights the decline in the population of savanna elephants in Africa by 30% from 2007-2014 and in forest elephants by 60% from 2002-2011. Over tens of thousands of African elephants are still being killed every year, just for their ivory tusks.

Wildlife Conservation Day is held every year on 4 December and aims to raise awareness for the rapid destruction of the world’s natural environment. As the threat of animal extinction is an extremely prevalent issue in the world today, supporting Wildlife Conservation Day has become more important than ever. To raise awareness of the harm that this demand for ivory is having on the elephant population and declining wildlife, Charlotte went against the clock for 24 hours to create 100 miniature porcelain elephant sculptures.

Displaying her project 100 Elephants during Collect Art Fair, held at the Saatchi Gallery from 28 February to 3 March 2019, gave Charlotte a platform to showcase her work to the public. The display of her work showed the clay animals circling around each other, getting smaller and smaller, just like our naturally decaying wildlife. Her work also featured on the front cover of the January/February 2019 issue of Crafts Magazine, the Crafts Council’s print publication.

Throughout the art fair, Charlotte stood by her work to interact with the public and inform them about what 100 Elephants represents. Seeing her creation in person was inspiring, as you were able to see the amount of effort and detail put into the work. Charlotte is not only talented at her craft but also passionate about her cause. This is becoming increasingly important for artists, as many strive to create work that will have a positive impact on their audience and raise awareness of current issues.

As a Ceramic Design graduate from Central Saint Martins, Charlotte primarily works with clay. Inspired by her rural upbringing and travels around the globe, particularly across Africa, Charlotte has become passionate about the natural environment and wildlife conservation. This is why Charlotte also donates 15 per cent of her profits from the sale of her work to support wildlife conservation. I reached out to Charlotte to find out more about her work.

What inspired you to create 100 Elephants?

“I’ve always tried to use my work to draw attention to our dwindling wildlife and natural world. I wanted to step outside of my comfort zone slightly and create a larger scale piece of work that wasn’t about the fine details, which I so regularly obsess over. Instead, it was more about conveying a story to help raise awareness. I became inspired to help try and raise awareness when reading about and watching the estimated 35,000 elephants lost each year. This is roughly 100 elephants a day (this is how I thought of making 100 in 24 hours!) and one elephant every 15 minutes. For the global demand of ivory, these numbers are staggering and completely unsustainable, so I really felt passionate about trying to convey this message through my work.”

Why do you think the elephant ivory trade is such an important issue to raise awareness for?

“Because the numbers we are losing every year is unsustainable, we are driving elephants – the largest land mammal – towards extinction, for what? A carved accessory for the home? A little trinket? Does it seem worth it!? I hope the people who have seen 100 Elephants have challenged their opinion on ivory, and they would perhaps think twice before buying or selling, as this creates more demand for the market.”

What were your biggest challenges during the creation of this work?

“Definitely letting go! My work is usually very controlled and fine detailed. For this project I had to completely let go of that in order to make 1 elephant every 15 minutes! Stepping out of my comfort zone and freeing up my making to work within a time constraint was harder than I expected. I always wanted to go back and add more detail, but was unable to otherwise I would not have finished in time! It was a great experience though and gave a different quality to each elephant – I felt they embodied a bit more energy and character!”

Charlotte is doing great things to support wildlife conservation and raise awareness of the illegal elephant ivory trade, but what can you do to help? Just by being aware of these issues is a great start. Get educated on what is happening in the world by reading up on wildlife conservation and the ivory trade on websites such as WWF and Born Free. It is also important to support artists and charities that aim to have a positive impact on animals in the wild, as this will help to provide more compassionate conservation around the world. Through the effort of individuals like Charlotte, we can strive towards protecting our natural world from further exploitation and destruction. Find out more about Charlotte’s work on her website and watch the video of her creating 100 elephants in 24 hours here.