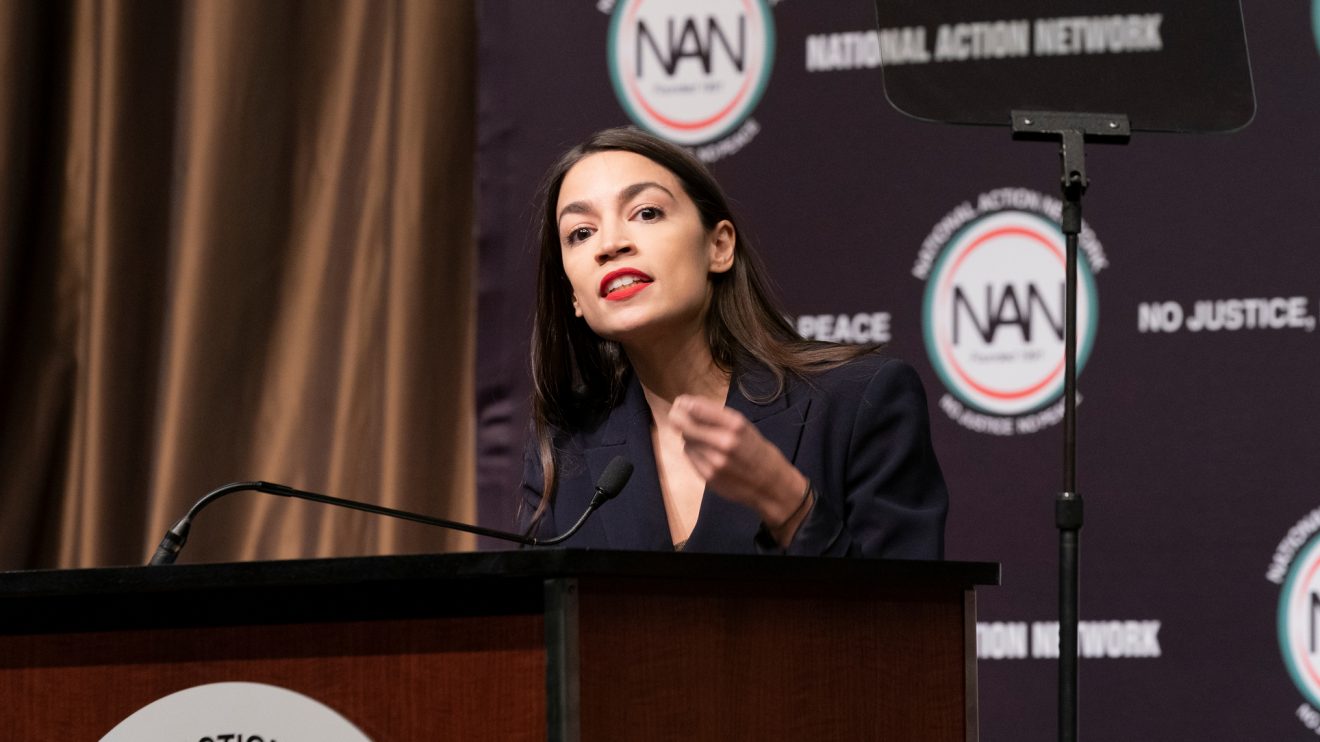 ‘Next time someone tells Bronx girls to take off their hoops, they can just say they’re dressing like a Congresswoman’: with 3.84 million followers on Twitter and a record-breaking 40 million views on a now-viral video dissecting the topic of campaign finance with a panel of ethics experts, Democratic Congresswoman Alexandria Ocasio-Cortez is as likely to be drinking wine, dropping emojis and breaking down oil company profits on Instagram live as she is participating in House Oversight Committee meetings. Her masterful deployment of the likes of Facebook, Twitter and Instagram as a means of demystifying political processes and engaging with the voting public sees Ocasio-Cortez at the forefront of an ever-growing number of American politicians from both sides of the governmental spectrum, using social media as a powerful galvanising tool.

In U.K. politics though, such channels have been used to varying degrees of success by elected officials. Amidst chaotic attempts by the government to decisively negotiate the country’s ‘Brexit’ from the European Union following the 2016 referendum, despite many representatives dutifully signing up for social media accounts the majority have so far been unable to emulate the unaffectedness of their American counterparts, nor imitate their reach. Though some politicians have undoubtedly used networking sites to further their careers, social media continues to wield its double-edged sword: as it increases the reach of party policies across the public, so too does it highlight the growing dissension associated with the deeply divisive and increasingly bitterly-contested decision to leave the E.U.

With 3.48 billion active social media users across the world, these channels have become an integral aspect of political processes and systems of governance. Launched in 2004 and initially, a networking site for university students, the global extension of Facebook in 2006 to anyone with an email address saw the channel rapidly grow in popularity, dethroning noughties social media giant MySpace by 2009. Twitter, also launched in 2006, has 126 million daily users as of February of this year; Facebook, an average 1.52 billion. Instagram, a photo and video-sharing service launched in 2010 and owned by Facebook attracts some 500 million users per day.

As an instigator for political change social media first showed its mettle when, on November 4 2008, little-known senator Barack Obama became the first African American elected President of the United States. Dubbed the “Facebook election”, it represented the first time that congressional and presidential candidates had unanimously deployed such technology as a means of reaching voters – particularly those previously dubbed as difficult to engage. Obama’s formidable campaign used Facebook, Twitter, Myspace, YouTube, LinkedIn, Flickr and more, engaging with social networking sites as a means of harnessing the electoral power of big data and representing a grassroots victory, complemented by tireless door-to-door canvassing. Despite running against established Republican political heavyweight and Vietnam war veteran John McCain, the Democrat nominee’s effective use of social media left his 72-year-old opponent trailing behind him.

It was around this time that the utilisation of social media as a tool for political organisation and change begun to manifest itself as a global movement: Twitter, in particular, played a key role in connecting people to information and enabling leaders to communicate with a broad audience during seismic events and and to direct campaigns, such as the Arab Spring uprisings in 2010. Meanwhile, the political potential of the internet, used during the U.S. elections in the past almost solely to raise funds, was used throughout 2007-08 as a means of communication and conversation. The campaign then represented the decentring of power: Obama appealed not just to the politically-engaged but to the masses, endearing him to Middle America as much as to ethnic minorities; crossing and obliterating decades-worth of established party lines and partisan issues; the hopeful embodiment of Obama’s victorious slogan: ‘Yes We Can’.

It was a method that was to be emulated by his presidential successor. In 2016, in what Time called one of the most shocking U.S. elections in modern political history, a former property tycoon and Republican candidate Trump defeated Democratic nominee Hillary Clinton. Described by the New York Times as a ‘stunning repudiation of the Establishment’, Trump was the first commander-in-chief never to have held a government or military position; and, like his predecessor, Trump’s surprise win was exponentially increased by his deft use of social media as a means of communication. Shunning the “fireside chats” and televised addresses of American leaders gone by, Trump’s poison is his Twitter account; as he himself described it his use of social media as ‘modern day presidential’.

With 59.6 million followers on his personal account alone, Trump uses social media to connect with his supporters, imbuing his tweets with the same prowess as a presidential statement and enabling him to bypass more traditional routes via what he dubs “the fake media”. As George Lakoff, Professor Emeritus of University of California has concluded, ‘Trump uses social media as a weapon to control the news cycle’, producing instantaneous and often unverifiable claims on average ten times per day in 2018 – many of which go “viral”.

Deriding the traditional media as “fake news” and calling upon U.S. citizens to ‘Make America Great Again’, Trump uses social media to create and distribute his own narrative – and to discredit his detractors. With short, sharp and often volatile statements his tweets undoubtedly contribute to an atmosphere of internet-based toxicity; an increasingly divisive and hostile politicised online environment, likewise been visible in the U.K, where 67% of the population are identified as regular social media users.

For the majority of U.K. politicians embracing online networking came later than their American counterparts. A comparative consideration of representatives from either side of the political spectrum reveals on average a greater early uptake of core social media channels on the left wing and centrist side of the spectrum: Labour leader Jeremy Corbyn and Shadow Home Secretary Diane Abbott signed up to social networking site Twitter in 2010, whilst Mayor of London Sadiq Khan joined in 2009. The Conservative party leader and current Prime Minister Theresa May created her account in 2016; MP Boris Johnson in 2015; and Jacob Rees-Mogg, a backbencher who has risen to prominence for his staunch advocacy of a hardline no-deal Brexit, signed up less than two years ago, in 2017.

Such disparity may be explained in part by variations in voting demographics: in 2016 Sadiq Khan, Labour’s candidate for the Mayor of London elections, used social media to run on a campaign emphasising values of diversity, openness and tolerance. This continuing stance, particularly in the wake of negotiations around Brexit, saw Khan use social channels to appeal directly to the multiculturalism of the city. In contrast, his opponent, Conservative Zac Goldsmith, was widely seen to have participated in a “dirty” campaign, accusing Khan of ‘giving cover to extremists’ in a statement perceived by many as inherently racist.

A year after Khan’s success, in the 2017 general election the Labour party experienced a significant and largely unexpected voting surge, dismantling what many perceived as the Conservative party’s comfortable majority and resulting in a hung parliament. This apparent phenomenon was in fact caused by the highest turnout amongst 18-24 year olds since 1992.In the U.K., where the majority of social media users are between 18-34 years old, the party’s use of social media is crucial to securing and maintaining the youth vote, as well as reaching those still too young to vote. Comparatively, the Conservative party is most popular with over-55s, whilst the average age of a party member in 2017 was 72 years old.

With Britain’s departure date for leaving the European Union having been and gone, and still without an exit deal, it seems certain that social media interactions between the two polarised sides of the debate will continue to be virulent. In the U.S. too, the wildly opposing worldviews of Trump’s supporters and liberal Americans has seen the normalisation of anti-immigrant rhetoric and hate speech across the country. Yet the President’s conservatism has also provoked the rise of a very different type of politician: the refugees, the women, the openly LGBTQ+ and the people of colour. And once again, social media has had its part to play.

Alexandria Ocasio-Cortez is the youngest woman in American history to serve in the United States Congress. Endorsed in her campaign by progressive elements and civil rights organisations, hers was a grassroots victory: the former bartender from the Bronx ran in the 2018 congressional election with little political experience, winning with 78.2% of the vote. No stranger to going viral, the Congresswoman frequently uses her social media channels to demystify political processes and governmental jargon; as she recently told a crowd at the annual convention of Al Sharptin’s National Action Network, ‘I’m proud to be a bartender. Ain’t nothing wrong with that’.

Ocasio-Cortez is part of a new and highly effective wave of progressive Democrats obfuscating the President and advocating for human rights: a living wage, affordable housing, healthcare and LGBTQ+ issues; for environmental policies such as her Green New Deal; and standing against Trump’s so-called ‘Muslim ban’, implemented as an executive order in 2017.

In the U.K., such opposition via social media exists less uniformly; as party lines blur in relation to Brexit negotiations MPs from the Labour party, the Scottish National Party, the Liberal Democrats and various fringe parties regularly take the government to task over Twitter. Yet such attacks are far from united: Labour MP David Lammy uses social media to advocate for a People’s’ Vote to decide the future of Brexit; Mhairi Black of the SNP, to promote human rights and to push back against austerity. For Brexit Party leader Nigel Farage, Twitter is a platform through which to reach out to the masses and to rebuff the stance of the so-called elite.

The British Prime Minister Theresa May has been widely derided for her perceived failure to get to grips with social media; with 819 000 Twitter followers to her opponent Jeremy Corbyn’s 1.94 million, May’s rhetoric has been described as contrived, her demeanour self-conscious. Nevertheless, current popular support for a Labour government remains far from certain; opinion polls continue to show a relative degree of support for the Prime Minister, in spite of her technological shortcomings.

To what extent, then, does social media reign supreme in the battle for political triumph? The potential on networking sites for misdemeanour and offence is optimum: in 2015 Trump described Mexicans as ‘drug dealers, criminals, rapists’; last year, the official Brexit campaign ‘Vote Leave’ was fined by the Electoral Commission for breaking legal spending limits during the EU referendum; and both the Labour party and the Conservatives face calls for investigations into anti-Semitic and Islamophobic abuse within their ranks, the implicit role of social media in these events begs this question: has politics always been this vitriolic and divisive? Or, by coalescing people and parties of wildly divergent opinion, have the likes of Twitter and Facebook amplified the divide?

To come some way towards understanding the ongoing role of such media in global political machinations, it’s perhaps most important to consider what we seek from social networking. Is it hope and change; to better ourselves and the world around us, through campaign, communication and the implementation of progressive policies? Is it truth; the word of the straight-talkers, representing a welcome change from the established and the elite? Is it the demystification of constitutional jargon and traditional bureaucracy? Or is it just former Labour leader Ed Miliband, photographed eating a bacon sandwich, and in that moment blissfully unaware of his future fate sealed as an internet meme?

Whatever the political role of social media may be going forward, its critical role is unequivocal. And with little indication of its grasp abating in the near future, it is clear that politicians across the world must decisively engage with titans of the technological world in order to survive. For better or worse; in praise or in warning, perhaps Trump surmised his political success best: ‘Without the tweets, I wouldn’t be here’.